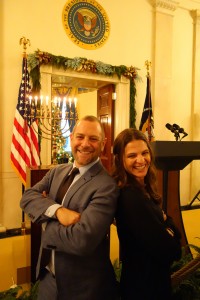 “It is better to light a candle than curse the darkness,” Eleanor Roosevelt once said. So with in mind, I was honored and excited to be invited for the White House Chanukah Party on the the eighth day – to pay my respects to first families past and present. There were many highlights, including meeting  many friends from all over the country, including  Rabbi Sharon Brous of IKAR LA. After 8 days of illumin8ing together online – we were thrilled to hug and post in front of the president’s seal and the fully lit menorah. Moments earlier, President Obama re
minded the 500 Jewish leaders present that this historic ThankChanukah is more just an opportunity for culinary surprises and turkey inspired menorahs – it is rather a bold rekindling of the American dream to let freedom ring for all people, at all times.
I teared up watching the Obamas light up a Menorah made up of nine miniature statues of liberties that was created by a Holocaust survivor, along with the family of an American soldier deployed in Afghanistan. How can I take for granted that I was a welcome guest, along with other leaders from all over the spectrum of American Jewish life, at the country’s highest seat? I don’t think this happened when the Roosevelts were living here – and when my family back in Europe would have needed this life-line most…
So we raised a glass of (kosher) wine to freedom and progress, and I went on pilgrimage to Eleanor’s portrait, alongside many other first ladies and world leaders. (more photos  in my facebook photo album)

And just as it was time to go – we heard the news of Nelson Mandela’s passing. One more toast was raise to a world leader who was a fighter for freedom and a bringer of light to the world:

“It is our light, not our darkness, that most frightens us.” Nelson Mandela once said, “And as we let our own lights shine, we unconsciously give other people permission to do the same. As we are liberated from our own fear, our presence automatically liberates others.”

And that’s a great note with which to end Chanukah 2013, the first one for Lab/Shul, our first Illumin8 series and a charge for what’s ahead. To light!

One thought to “Eleanor Roosevelt, Nelson Mandela, Barack Obama & Many Friends: My Chanuka at the White House”