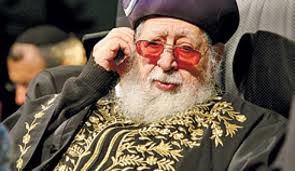 The greatest jurist of the Jewish world died this morning at 93 years old. Despite his debated and paradoxical legacy, his venom towards the likes of me and so many others – I pause with so many others to honor a life of dedication to a vision, the life of a leader. R. Ovadia Yosef marks the end of an era – his style of legal writing and Sefardi approach was unique and seals the 500 years of post Spanish exile – starting with R. Yosef Karo – his role model. History will mark this death as a milestone in our evolution. Also – he had great style, choice of shades alone is legendary, never mind the golden threaded dresses.R. Ovadia was not just a jurist and fashion icon- but a rare political leader, in recent years more of a puppet – who leaves behind an embattled party and a bitter legacy of political animosity towards all that saw as ‘other’ and ‘threat to Judaism’ – including those on the political left, secular, gays, gentiles and more. To the man who called me ‘rabbit, idol-worshipper, filth’ and worse I can now say: o well, farewell, thank you for the good stuff, too bad for your narrow vision of divine image in all – and may your memory be blessing and healing for generations to come.

The article from Ha’aretz today describing more about this man’s life and achievements.

One thought to “End of an Era”