Unscrolling: This year I’m reading the weekly Torah portion through the eyes of 54 creative wrestlers in Reboot’s new book Unscrolled. My year long journey will be blogged weekly as commentary on their commentary, quoting quotes, plucking pearls from this pool of biblically inspired juices for a more inspired now. 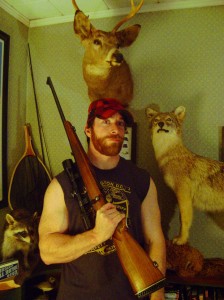 He’s a hairy hunter, redhead, scratch golfer, ice Skater, tasseled loafers, class ring, eggnog dripping from bushy mustache Jew. And he’s on JDATE.
Meet Esau: First and ultimate GoyJew.
Joshua Foer calls him “the first Jew to wish he wasn’t.”
How’s that for a Halloween costume?
Foer’s unscrolled #6, Toldot,  zooms in,  with what I think is more than just affection – on the first firstborn of Isaac, who ends up married three shikasas to become the brother who turned other. Eventually an enemy. But wait a minute. Must it be so??  Foer’s version of Esau feels like family, including the familiar dysfunction –  and he’s certainly  a familiar figure in the life of modern (Jewish) America: the Jew that got away.  Esau the disengaged and/or assimilated Jew features large, if nameless, in all recent surveys and studies that lament the numerical decline of American Jewry.
Esau is unloved by Jews since the days of the Bible. From Isaiah to Heschel, poets and rabbis linked his lineage to mortal enemies:  Roman Empire, Vatican, Haman, Hitler.
But Foer’s 2013 Esau is the goy next door, who’s really Jewish (Paula Abdul? really?) but not really into it, or sort of is but vaguely and with Christmas tree, and s/he is in our beds and boardrooms and family trees and speedials and hearts. Esau is us. A lot of us anyway.
Esau is family. Enough with the fighting already. Welcome home.
(Maybe college campuses should have Esau Clubs celebrating hyphenated identities and co-sponsored by the NRA but secretly funded by Hillel?)
Inspired by Foer, I think I’ll go as Esau for Halloween this year. Not NRA outfit exactly, but something very goyish, non rabbinic, red, fur, celebrating  this o most pagan of holy days with almost as much relish as its spring sister holiday – Purim. Halloween is a dress rehearsal to the more spiritually complicated Purim in which Esau as Haman is annually hung and reviled but through masks and intoxication we get to actually love him again and forget who’s good and bad and get over it and try to be united again, with all the voices in our head and life.
I’m thinking top hat and furs and maybe some sexy. Masking self and becoming briefly something different than my daily to dance with other selves, other voices, an other turned brother inside me, sinister sister, a chance to turn things upside down in the ultimate hope of lesser divides. Goy style.
Walk a night in Esau’s boots or loafers to remember what it feels like to be both twins, again. Jacob was the first to try that… The voice of Jacob and the hands of Esau.  Welcome home, bro. Trick AND treat.

Related Articles
Still No Abomination. My Imagined Bar Mitzvah Speech is back