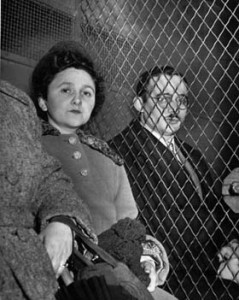 Ethel Rosenberg, 35, and her husband, Julius, 34, are separated by a wire screen as they ride to separate jails in New York City March 29, 1951 following their conviction as traitors in the nation’s first atom spy trial. Convicted with them was Morton Sobell, a 33-year-old radar expert. They were accused of trying to deliver war secrets, including vital A-bomb data, to Soviet Russia.