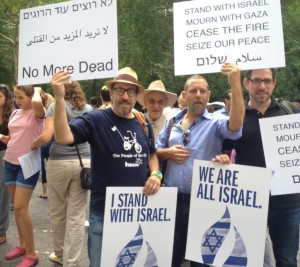 July 28 2014.
I went to the UJA Federation organized rally today in NYC in front of the UN – to stand with Israel – with my own signs.
I went with Nigel Savage, Rabbi David Ingber, Sandi DuBowski, Molly Yavetz, Rabbi David David L Kline, and a few other Storahtelling LabShul friends.
The signs I made called for standing with Israel, while mourning with Gaza. They asked for no more dead – in Hebrew, Arabic and English. Some people were appreciative and grateful for the nuanced messaging, but others spat at me, pushed at me, wished me to go die in Gaza and Germany. To the older woman who kept following me with her own ” Stand with Israel” sign to block my own sign and yelling out loud – look at the traitor – he’s a mamzer – a bastard – I turned and said, calmly – my father is a Holocaust Survivor, please respect him if not me. To which she replied – he should have died there. There were other obscene and racist statements that I won’t describe.
Rabbi David Kline held one of our signs that read ‘No More Dead’ in Hebrew, Arabic and English. It was grabbed from his hands and torn in two because there was Arabic on it. He kept on holding the torn sign. 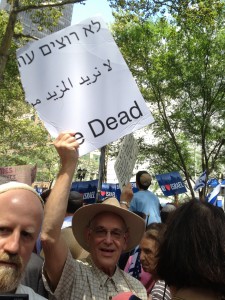 There was so much hatred amid the flags and so called unity. I realize this was the back mob, not the stage, where more balanced speeches were made.
I am glad I went. I stand with Israel’s right to defend itself and survive. I am a proud Israeli Jew. I stand with Palestine’s right to exist and be free, I mourn with the families of the dead on both sides. I grieve for the blood of innocents no matter how hard IDF tries to prevent this. Each dead solider reminds me of my own days in the IDF – the friends I buried, the nights of fear, the relief of coming home.
I refuse to be either/or and avoid true compassion and care. I am sad for those of my people, here and in Israel who have been so infected by fear to be unable to handle both pride and compassion.
Enough Pro Israel or Pro Palestine – I’m Pro Solution.We have a moral obligation as Jews to expand our circle of care and compassion even as we fight for the right to exist. I wish more of our leaders would be there. But for now, I am proud of having been there with some of the bravest rabbis, leaders and good friends that are helping walk the talk towards more peace and progress.
May this new moon bring with it better news, for all.

8 thoughts to “Not Pro Israel or Pro Palestine. No Either/Or. And-Both. I’m Pro Solution. Here’s why:”