amichaiNovember 29, 2015generalComments are off for this post
What if a fierce fight can turn to dancing, and then become a hug, and then wild loving. Sometimes friends turned foes or warring siblings can forego the feuds and rediscover what’s beneath the hurt. Sometimes it all takes is a reminder. I had one of those today.
On my way to getting gifts in Jerusalem this sunny morning, getting ready to head back to NYC, I take a short cut through a street I’ve walked through countless times. But today I stopped – the street name matches today’s date, I suddenly realize: November 29.
On this day in 1947 the UN partition plan for British ruled Palestine was voted on, accepted by the Jews with joy, rejected by the Arabs in fury, leading to war, never implemented. Amos Oz tells of this night in his book “A Tale of Love and Darkness”, recently made into a film by Natalie Portman. 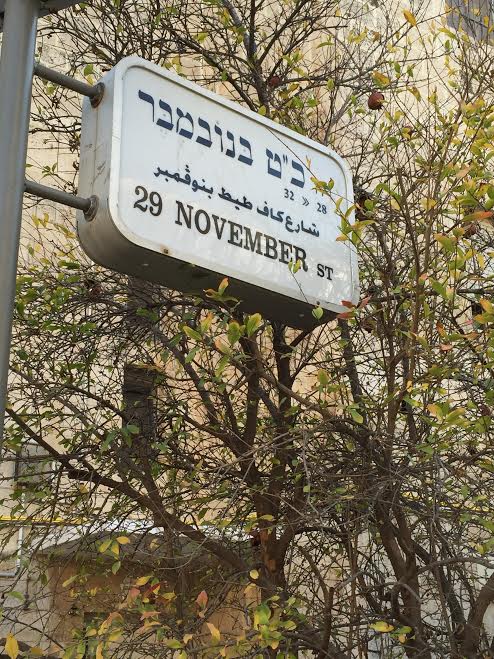 Some 70 years later, other proposals for other possible partitions or solutions are still struggling and just as I was crossing the 29th of November my iphone beeps with a news flash – another stabbing only a mile away. Over 45 wounded and 21 killed in the week I’ve been here – Jews and Arabs, all victims, if on different scales of blame and rage and terror, of this all too holy land.
How to break the seemingly endless cycle of revenge? How do we rewind and once again believe in the dream of two nations, siblings, cousins, figuring out  the best interests for future flourishing that puts away the bloody past, rewires the present and finds a common hope?
I had spent this past week with my family, honoring the memory of my father, marking the year since he died. There were laughs and tears, and meals and screenings, many little dramas and reunions that make up what families are all about. Back in the states family and friends celebrating Thanksgiving went through similar terrains if to judge by some heartfelt posts. There were some tensions too. There often are. And one of those  weighed heavy on my heart as I walked this morning, echoed large by the street sign, and its meaning, and the news of yet more blood.
But the next beep on my iphone was a short email from a teacher and friend, offering redemption through a brief amazing commentary on the story we had just chanted yesterday from Genesis – the one about Jacob wrestling all night long with an angel or a demon that at least from some angles looked so much like the big brother he had fled from and was now attempting to reconcile with. The Hebrew for the wrestling in Genesis 32:26 is ‘va’yeavek’ – ‘and he wrestled’.  But Rabbi Bahya, a 14th century Spanish sage, offers a radical reading: Jacob isn’t wrestling with the other- he’s hugging, all night long. It isn’t ‘va’yeavek’ – it’s ‘va’yehabek’. Just one letter difference and a whole different story, one of love, perhaps even with eros.
We are so conditioned to think in terms of either/or, fight or flight, suspicious and blame, Jacob vs. Esau, that it’s hard to even imagine a reality of co-existence on the highest plane of good will, dancing where the daggers now demand the day, on the streets still names for failed attempts at figuring things out.  On smaller scales, siblings still play out childhood dreams and dramas, not always resolved or examined, leading to fights that can loom large over seemingly nothing and last all night long.
Grateful for this small-big teaching I made peace within and reached out to the one relative with whom some tensions lingered still, and sat down to write this down as I pack and head back to my other home, hoping for a quiet day here, and many more ahead, and nights with less wrestling and curfews, sirens and wailings, brothers in arms. More hugs, more dancing, more courage to rewrite our stories, re-read the street signs and the gestures, honor the past for all its fences and find new ways to very simply hug.
Happy 29 of November. Make more love, less war, and let’s hug our way to co-existence, with more peaceful sunny days and nights of endless love. Naive, I know, but hey, it beats what’s happening right now.
Amichai Lau-Lavie
11/29/15